Written by the Winners 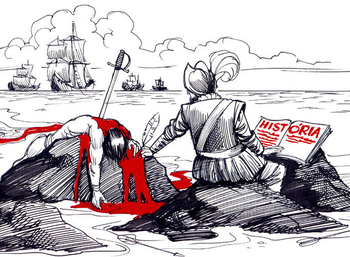 "The very ink with which all history is written is merely fluid prejudice."
Image

. Used with permission.
"If you win, you need not have to explain.
If you lose, you should not be there to explain!"
— Adolf Hitler note who, sure enough, wasn't "there to explain" at the end of the war.
Advertisement:

When the official history of the setting is overwritten by the ones in power and their Propaganda Machine. As such the real heroes and good guys are given Historical Villain Upgrade, the bad guys build a Cult of Personality around their actions and all the bad sides of the past is submitted to a Rose-Tinted Narrative.

In Real Life and actual history, it is certainly true that historical accounts can be subject to the personal bias of the writer and readers have to be wary of them, which is what the saying warns us about. However, applying the saying in such a simplistic manner can potentially be as reductive, misleading, and more importantly just as binary as "the winners' narrative". To say that history is written by the winners should mean that we should treat both the winners and losers fairly and not present a one-sided view. Academic historians would qualify this by stating that our knowledge about our past, certain figures and events, is based only on a few sources and furthermore, our understanding of history is never static and unchanging. History is, in truth, written and rewritten by all sorts of people with different agendas. For example, while the records are indeed often biased in favor of the winners, they're just as often biased in favor of the losers, who put pen to paper so they could gripe about how different things would be if they'd won out. Historiography

is a separate discipline that actually studies and keeps track of how people's opinions about the past and certain events change throughout history. The reason for those changes is that people who win in one era, would lose in the other and their conquerors will be as generous to the defeated as they were to their defeated. Likewise, "winners" and "losers" mean a variety of things. In the military-political sense, losers at times do end up writing history; since they've often been deprived of actual power after their defeat, they often spend their time sulking and writing about how things would have been so much better had they won — just ask a Neo-Nazi or a Confederate apologist

. The "real" actual and potential losers in this situation would be in the racial-economical sense, (African-Americans, Jews, LGBT and other minorities).

Also worth pointing out that not every "winner" is going to be slick and sly about their crimes, simply because they don't view them as crimes. Many of history's "winners" will be surprisingly honest about atrocities or even write proudly of how they brutally crushed their opponents, because it would serve their self-interest and their careerist aspirations. For example, Caesar wrote of his borderline genocide of the Gauls in his personal memoirs, and historians doubt that account and other Roman accounts only because they feel Caesar is exaggerating, not only his actions but also those of his enemies, since Romans always did like painting its wars as "defensive" and their victories as underdog triumphs, so historians are skeptical about the moments when Romans invoke Worthy Opponent on their enemies as well. It likewise appealed to the vanity and pride of an Empire to preserve trophies and symbols of their conquest of foreign peoples, after all if the winner is writing a history, they would need losers to make themselves and their achievements look special. You can't be a King without a Kingdom and a People to rule over, so in every work of propaganda there are, for lack of a better term, Freudian Slip and other bits and moments that actually do allow the multitude to peep over the shoulder of their rulers. It's also worth pointing out the most obvious fact that even people on the same side will often disagree wildly on events and motivations.

This is also connected with Grey-and-Gray Morality and Morality Kitchen Sink in that picking one side of the story over the other in this context does not necessarily make it correct. After all, Your Terrorists Are Our Freedom Fighters.

Note that if the historical dispute already exists its use may become controversial at worst, or people may feel there is a Writer on Board at best. And if it doesn't, people may not take it seriously, and think that Beethoven Was an Alien Spy is at play instead (disputing historical accounts is the task of historians, not authors of works of fiction). The usual way to deal with this is to apply the trope to completely fictional history, where both the official and disputed events are fictional to begin with. Such as the exploits of the national hero of a fictional country, or a Empire with a Dark Secret. The usual way is to provide a recap of the official history, have the hero find out the real and darker history, and start a conflict between him and the figures in power that may be in problem if the actual history comes to light. There are three possible outcomes. One, The Bad Guy Wins and official history stays. Two, the actual history comes to light, and Nothing Is the Same Anymore. Third, the hero realizes the scope of the changes that would take place and decides that it's not worth it; for good or evil, history has already happened a long time ago, and its discussion should be merely academic.

A prime belief of every Conspiracy Theorist. Sub-trope of Might Makes Right. Supertrope of Internal Retcon and Pop-Cultural Osmosis and Hollywood History. Contrast You Cannot Kill An Idea.

In Black Flag, Abstergo paints an unflattering (and in most cases, blatantly false) picture of past protagonists of the series.

For Altair, they portray him as prideful (leaving out his redemption quest) with a tendency to offend traditions on a whim (like burning his mentor's body, leaving out that it was to ensure that he was well and truly dead) and was nothing more than a cold-blooded killer.

Alternative Title(s): Written By The Victors

In Black Flag, Abstergo paints an unflattering (and in most cases, blatantly false) picture of past protagonists of the series.

For Altair, they portray him as prideful (leaving out his redemption quest) with a tendency to offend traditions on a whim (like burning his mentor's body, leaving out that it was to ensure that he was well and truly dead) and was nothing more than a cold-blooded killer.