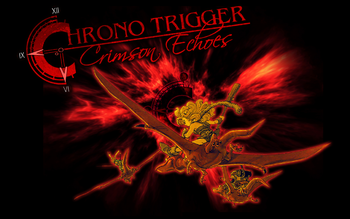 "The Dream of Zeal is alive!"
Sargon (to Melchior and Belthasar)
Advertisement:

Chrono Trigger: Crimson Echoes is a Fan Sequel to Chrono Trigger, taking place before Chrono Cross. Through a series of fateful events, its formal release to the public in May 2009 after five years of development was cancelled when the developers reported that Square Enix supposedly sent them a Cease and Desist letter.

Though the project was cancelled under fear of litigation, the incident led to massive backlash in three forms, one consisting of fans of both the series and the project railing on Square Enix for shutting down the project, another consisting of skeptical fans thinking the whole thing was a publicity stunt for attention (in particular, noting inconsistencies with actual C&Ds sent by Square Enix and the plethora of non-C&D'd projects based on Square Enix properties), and a third consisting of copyright-supportive fans and legal brains railing against the modders for using Square Enix's stuff in the project. It generated significant coverage in high-profile gaming blogs that led to the mod getting notice from Slashdot and Google News.

Eventually, a months-old and seriously-buggy alpha was leaked in late May and spread virally online and in file-sharing, and then a comprehensive playthrough video of the entire 98% complete beta version of the game was uploaded in many 10-minute segments

on YouTube. A copy of a beta version that was 95% completenote (Its completion percentage was confirmed by Flames Of Eternity developer "Giro" - who used it for the FoE project from then on.) was leaked to filesharing sites

A different team started an alternate project consisting in modifying Crimson Echoes, with a slightly different story and events. The project is named Chrono Trigger: Flames of Eternity

and has the tagline "The Rage of the Ages burns for Eternity...". You can find a copy of it here.

If a Trope already applies to Chrono Trigger proper, it probably shouldn't be duplicated here.