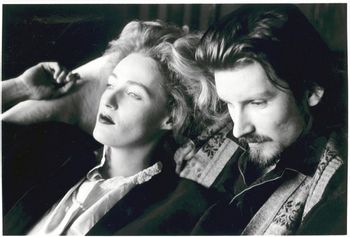 Dead Can Dance (not to be confused with The Dead Can Dance) was an Australian band active from 1981 to 1998. Fronted by Brendan Perry and Lisa Gerrard, it started out as a regular Gothic / Post-Punk act, and gradually broadened its scope with other musical genres (especially Neoclassical and World Music), all the while retaining a typical dark and brooding, but not specifically angsty, atmosphere. Due to its Ethereal Wave sound and being active on the 4AD Records label, the band was frequently associated with the Dream Pop genre, despite the predominance of Neoclassical, Ethereal Wave, and World Music influences.

Their debut album, simply titled Dead Can Dance and released in 1984, is already a noticeable blend of Perry's rock influenced style and Gerrard's more introspective, borderline mystical one, but arguably the Post-punk leanings make it more of an example of Early-Installment Weirdness. The same dynamic is felt in their next two albums: Spleen and Ideal (the title is a reference to Charles Baudelaire) and Within the Realm of a Dying Sun, but these gradually dialed down the Post-punk goth elements in favour of the band's Signature Style.

At that point they started experimenting with classical instruments (oboe, string section) and in their following album: The Serpent's Egg, they introduced baroque and medieval rhythms, laying the groundwork for their seminal work Aion. They next ventured into Oriental influenced music with Into the Labyrinth, their first album to be released in the USA, and Lisa Gerrard developed what would become her Signature Style during her subsequent solo career, the One-Woman Wail.

After one more album: Spiritchaser, which attempted to explore tribal rhythms but came out as a disappointing New Age-y and World Music style work, the duo split up in 1998. They temporarily reunited for a world tour in 2005. In 2011, they reunited again. They released a new album: Anastasis, in 2012.

Dead Can Dance provide examples of: