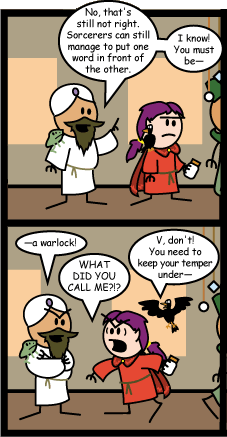 It's not uncommon to see a lot of rivalry between magicians in a fantasy setting, be it due to academic pride, competitive spirits, or plain envy. This is especially common if the setting has Mutually Exclusive Magic… and even if it all comes from the same source.

Much like the rivalry involved in Magic Versus Science, magic users will be prejudiced against each other based on their philosophy regarding magic, how they study it, and/or how they cast spells. You'll frequently see mages versus wizards versus witches versus clerics versus shamans *deep breath* versus druids versus warlocks. Put another way, a wizard of Ritual Magic will sneer at a bard who approaches magic as music, casting spells based on poetic rules. And of course both will scoff at the cleric whose magic is based on articles of faith rather than academic or artistic viewpoints. And then you have things like Psychic Powers and Ki Manipulation, which carry the additional question of whether they're magic at all or something else entirely.

Frequently the themes behind the various forms of magic will take one of the various points within Functional Magic. Magicians who follow Magic A Is Magic A will be academic, studious, and always "researching" new spells. Artistic mages usually have some form of Functional Magic that they tap into in unconventional ways. Hermetic Magic practitioners follow ritual like academic magicians but usually ignore the “how” and “why” in favor of theological explanations or even plain old faith. Expect these mages to be on differing sides of Harmony Versus Discipline, with some seeking to “control” magic, others to “channel” it, and some to understand and influence it. Conflict between different schools of magic can also be connected to a setting's regional and cultural divides if different communities all follow their own distinct magical traditions.

Objectively, expect all these magical approaches to be valid in their own right, usually have Competitive Balance, while at times being capable of a Yin-Yang Bomb when various disciplines collaborate. (For example, ritual magic is usually stronger than other magic, but takes longer and requires spell components. Meanwhile, academic wizards usually only need to speak or even think to use a spell, but their craft requires great training, study, and discipline.) One frequent representation of this is the Trash Talk seen when people with opposite Elemental Powers fight each other. Only very rarely will these settings reveal there are Red Mages who combine these varying forms of magic.

This trope is named for the Discworld book Equal Rites.

Mages that ignore differences and mix-n-match supposedly-incompatible varieties of magic are described under The Red Mage. Compare Magic Versus Science and Hard on Soft Science, since usually one approach will be more scientific than the other. Of course, if you throw in science as well, expect all degrees of deadly projectiles to start flying.

Magic or Psychic? covers the conflict between Functional Magic and Psychic Powers, specifically.

For a trope that covers a (usually) different kind of prejudice among fantasy characters, see Fantastic Racism. Compare Klingon Scientists Get No Respect.

See also Our Mages Are Different for the "participants" of this conflict.