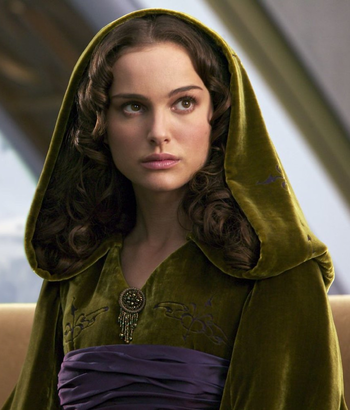 "I was not elected to watch my people suffer and die while you discuss this invasion in a committee!"

Portrayed by: Natalie Portman
Advertisement:
Voiced by: Catherine Taber
Voiced by (Latin American Spanish dub): Cristina Hernández
Voiced by (Japanese dub): Maaya Sakamoto
Voiced by (French dub): Sylvie Jacob
Appearances: Master and Apprentice | Queen's Peril | The Phantom Menace | Queen's Shadow | Attack of the Clones | Queen's Hope | Brotherhood | The Clone Wars | Forces of Destiny | Age of Republic | Dark Disciple | Thrawn: Alliances | Revenge of the Sith | Dark Lord of the Sithnote flashback and vision only | | Obi-Wan Kenobinote flashback Darth Vadernote appears in flashbacks and visions | Vader Immortal note  appears as a voice and hologram | Darth Vader (2020) note  flashback and mural
"To those who act as agents of chaos, I say this: I stand resolute and unyielding. And if you strike my voice down, know that a chorus of thousands shall rise up in its place, for you have no dominion over the righteous. We are the defenders of truth."
Advertisement:

Padmé Amidala, also known as Padmé Amidala Naberrie, was a courageous, hopeful leader who served as the Queen of Naboo and then as Senator representing the planet in the Galactic Senate, as well as being handy with a blaster. Despite her ideals and all she did for the cause of peace, her secret, forbidden marriage to the Jedi Knight Anakin Skywalker would prove to have dire consequences for the galaxy. Padmé was also the mother of Luke Skywalker and Leia Organa and maternal grandmother of Ben Solo/Kylo Ren.

open/close all folders
#-D
Advertisement:
E-H
I-Q
R-Y
"So this is how liberty dies - with thunderous applause."