Spoilers for Thrawn will be left untagged. You Have Been Warned. 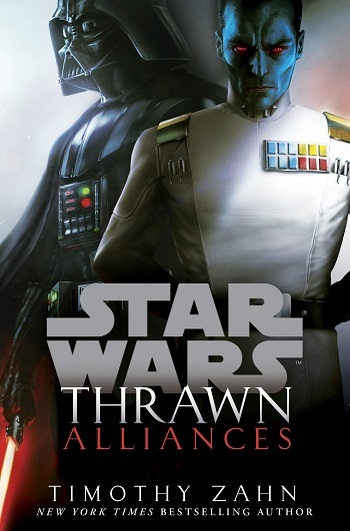 Thrawn: Alliances is a Star Wars Expanded Universe novel written by Timothy Zahn, who previously authored Legends works including the original The Thrawn Trilogy that first introduced the character into the franchise, as well as the preceding novel, Thrawn, which had explained the titular character's new origins in the Continuity Reboot. Alliances is a sequel to Thrawn, in what is believed to be the New Thrawn Trilogy.

After the events of Thrawn and Season 3 of Star Wars: Rebels, Palpatine sends Vader and Thrawn to deal with a mysterious disturbance in the Force emanating the edge of the Unknown Regions, on the mysterious planet of Batuu.

It was released July of 2018, following the release of the Thrawn comic adaptation earlier that year. A sequel book, Thrawn: Treason, was released on July 23, 2019.