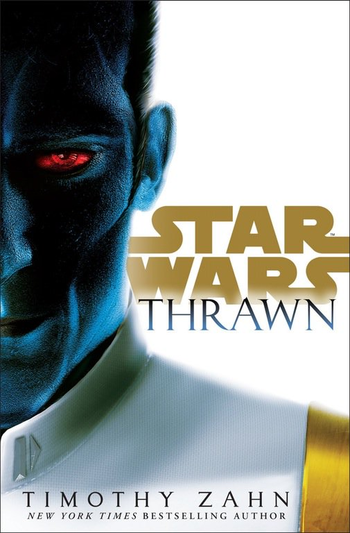 "There are things in the universe that are simply and purely evil. A warrior does not seek to understand them, or to compromise with them. He seeks only to obliterate them."
All beings begin their lives with hopes and aspirations. Among these aspirations is the desire that there will be a straight path to those goals.
It is seldom so. Perhaps never.
Sometimes the turns are of one's own volition, as one's thoughts and goals change over time. But more often the turns are mandated by outside forces.
It was so with me. The memory is vivid, unsullied by age: the five admirals rising from their chairs as I am escorted into the chamber. The decision of the Ascendancy has been made, and they are here to deliver it.
None of them are happy with the decision I can read that in their faces. but they are officers and servants of the Chiss, and they will carry out their orders. Protocol alone demands that.
The word is as I expected.
Exile.
The planet has already been chosen. The admirals will assemble the equipment necessary to ensure that solitude does not quickly become death from predators or the elements.
I am led away. Once again, my path has turned.
Where it will lead, I cannot say.
Advertisement:

Thrawn is a Star Wars Expanded Universe novel by Timothy Zahn, who previously authored Legends works including the original The Thrawn Trilogy that first introduced the character into the franchise. Thrawn delves into the new origins of the titular character, making it a preboot of sorts. The novel is a prequel to Star Wars Rebels, where Thrawn was first reintroduced into the franchise after the Continuity Reboot.

After Mitth'raw'nuruodo, or Thrawn, is rescued from exile by Imperial soldiers, his deadly ingenuity and keen tactical abilities swiftly capture the attention of Emperor Palpatine. And just as quickly, Thrawn proves to be as indispensable to the Empire as he is ambitious; as devoted as its most loyal servant, Darth Vader; and a brilliant warrior never to be underestimated. On missions to rout smugglers, snare spies, and defeat pirates, he triumphs time and again — even as his renegade methods infuriate superiors while inspiring ever greater admiration from the Empire. As one promotion follows another in his rapid ascension to greater power, he schools his trusted aide, Ensign Eli Vanto, in the arts of combat and leadership, and the secrets of claiming victory. But even though Thrawn dominates the battlefield, he has much to learn in the arena of politics where ruthless administrator Arihnda Pryce holds the power to be a potent ally or a brutal enemy.

All these lessons will be put to the ultimate test when Thrawn rises to admiral—and must pit all the knowledge, instincts, and battle forces at his command against an insurgent uprising that threatens not only innocent lives but also the Empire's grip on the galaxy—and his own carefully laid plans for future ascendancy.

It was released on April 11th, 2017, by Del Rey Books. It is received a sequel, Thrawn: Alliances, which released in Summer 2018. A third book, titled Thrawn: Treason, was released in Fall 2019.

... For if one is remembered by a friend, one is never truly gone.