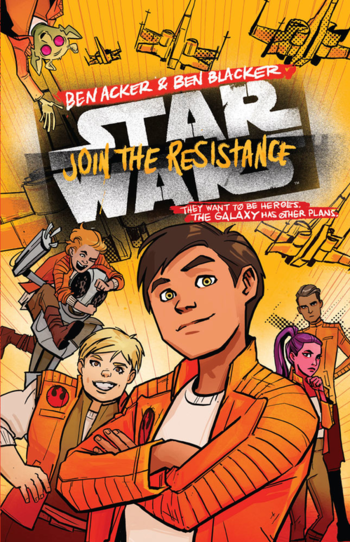 They want to be heroes. The Galaxy has other plans.
If being a hero were easy, everybody would be one.

Join the Resistance is a Star Wars Expanded Universe middle grade novel series written by Ben Acker and Ben Blacker, illustrated by Annie Wu, about a group of young Resistance newcomers who believe that they're ready to take down the First Order, but things turn out to not be as all cracked up as it seemed. The story takes place sometime after the events of Bloodline, but set shortly before (and later, during) the events of The Force Awakens.

Set from the perspective of Mattis Banz, who under the belief that he’s meant to be a hero of the galaxy like the legendary Luke Skywalker, he gets recruited by General Leia Organa's Resistance in its efforts against the evil First Order, and believes that he's finally on the road to fulfilling his destiny. Unfortunately, the rest of his flight squadron that he gets assigned to doesn't seem as... promising.

Sure, there’s the Zeltron girl Lorica Demaris, famous for her exploits foiling evil smugglers, but there’s also the swamp boy named Dec, who seems to enjoy causing trouble; Dec’s “brother,” a droid who thinks he’s a pilot; Sari, whose imposing size contradicts her sweet nature; and Jo, the stuffy group leader with secrets. How is Mattis supposed to be the next Poe Dameron when he and his squad mates spend more time in trouble than flying X-wings? The team will have to learn how to work together when the going gets tough, or they won’t be going anywhere…