Literature / The Glove of Darth Vader 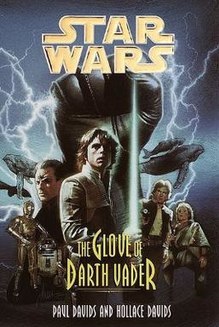 "Quite surprising. I've certainly never heard any gossip that Emperor Palpatine had a son by a three-eyed alien woman."
— The series in a nutshell, courtesy of C-3PO
Advertisement:

The Glove of Darth Vader is the first installment of a series of Star Wars Legends novellas for younger readers written by Paul and Hollace Davids and published in the early 1990s. Introducing a new hero named Ken, this storyline also follows the continued adventures of the heroes of the movie trilogy as they fight the remnants of the Empire, now led by a sinister cult called the Prophets of the Dark Side and a man who claims to be Emperor Palpatine's son. The books are most remembered nowadays for their questionable quality, but occasional references to them crop up in later Legends books, and they've been neatly fitted into the official Legends timeline (with a little bit of retconning to make them fit better). The title of the first book has been adopted for the (untitled) cycle as a whole, which is also known by the names of Jedi Prince and Son of Palpatine.

In 1996, omnibus editions were released that collected the whole series in two volumes. There was originally supposed to be a concluding seventh installment, relating the final fate of the Prophets of the Dark Side, but this was never written, perhaps because of the backlash against the previous books and the release of other, more popular Expanded Universe works which followed a different timeline.