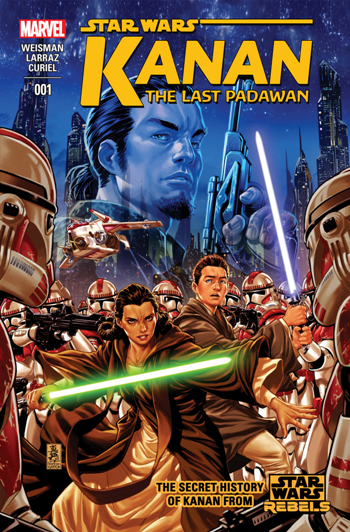 Kanan was a 2015 comic book series published by Marvel Comics. It was the third ongoing series (and fifth over-all) set in the rebooted Star Wars Expanded Universe. The series was originally meant to be a five-issue limited one, but following the successful premiere of "Spark of Rebellion", a decision was made to expand its run. The series concluded with the release of Issue #12 on March 16, 2016.
Advertisement:

Written by Greg Weisman, the first five issue arc titled "The Last Padawan" tells the story of how Caleb Dume, Jedi Padawan, survived the Jedi Purge and became the jaded freighter pilot Kanan Jarrus, first introduced in A New Dawn, before becoming one of the main protagonists of Rebels.

The second story arc titled "First Blood" (also written by Weisman) goes even further in Kanan's backstory, explaining how he became Depa Billaba's Padawan and their first array into the Clone Wars as Master and Apprentice.

Both story arcs feature segments chronologically set during the first season of Rebels. The sixth and twelfth (and concluding) issues focus exclusively on an adventure with the Ghost crew in the "present day".

Later adapted via Broad Strokes in the first episode of Star Wars: The Bad Batch, retconning a few details including the inclusion of the titular clone squad and their involvement in Order 66.

Tropes in Kanan include: