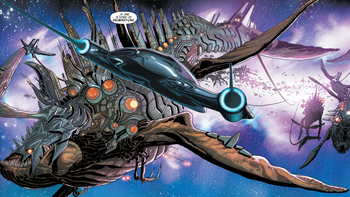 "We're whalers on the moon
We carry a harpoon...
But there ain't no whales, so we tell tall tales,
And sing our whaling tune!"
— Futurama
Advertisement:

Space Is an Ocean. This is a well-known phenomenon. For some reason, though, the ocean of space is pretty much devoid of fish.

But not of whales.

Somehow, at some point (probably in the 1970s), the ideas of space and whales became permanently interwoven in the collective unconscious. Why? No one really knows, but here is some wild speculation:

But nevermind the whys and wherefores, space and whales are just two great tastes that taste great together. In some cases, the whale may be used as a Living Ship by smaller hitchhikers. Often, these whales will be capable of Shipless Faster-Than-Light Travel in order to cross the enormous distance they travel across.

A planet-bound variant of the Space Whale is the Air Whale, which is often a Living Gasbag and found in settings where The Sky Is an Ocean. Whales are basically shaped like blimps with fins anyway, so it makes visual sense. (That is, if you hate gravity, and really, who doesn't?)

Not to be confused with the Space Whale Aesop, which is something quite different.

An intergalactic, star-making squid gives up his physical form in order to save his mate and their offspring from being sucked into a gigantic space whale.

An intergalactic, star-making squid gives up his physical form in order to save his mate and their offspring from being sucked into a gigantic space whale.