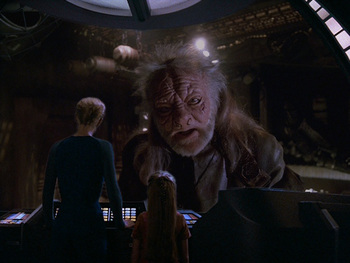 You know how Star Trek is weirdly obsessed with Moby-Dick allegories? Well, this is Qatai.
Voyager comes across a wormhole that comes straight out of nowhere, with readings that it is on a path straight to the Alpha Quadrant. Seven of Nine suspects that the wormhole may not be what it appears to be, and during her investigations finds a ship within the wormhole with an alien passenger warning her to turn around because she's being deceived. Unfortunately, the crew keeps Seven from making any further investigations and try to put her in sedation as they get closer and closer to the wormhole.
Advertisement:

With nobody to stop the crew, Janeway orders them to enter the wormhole, unaware that it is actually a giant energy creature that is psychically manipulating them so they can pilot the ship straight into its digestion chamber. At Naomi Wildman's urging, Seven awakens after most of the crew is rendered unconscious, and they set out to find their way out of this mess. They activate the Doctor, and discover one more life sign in the creature's digestive tract - a crotchety old hunter named Qatai, who's been matching wits with this creature for literally decades.

Qatai is beamed aboard after some back & forth, and they all band together to figure out how to get themselves out of the energy creature (which is referred to as the "telepathic pitcher plant"). It's not long before they put The Plan together - fire one of Qatai's tetryon-based weapons at some antimatter released from Voyager's warp core. During their first attempt, the creature was psychically manipulating Seven to make her believe that Voyager escaped when it didn't - the first time the creature actually had Seven's number. Qatai talks her into one more attempt, and Voyager and the alien ship are able to escape, and the crew awakens to find that they are still in the Delta Quadrant and that the wormhole is gone.

The Federation starship Voyager moves on to the next adventure, while Qatai flies right back in for one more round with his arch-nemesis.