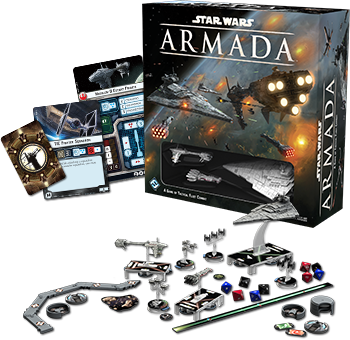 Star Wars Armada is a miniatures game by Fantasy Flight Games based on Star Wars and the capital ship battles therein, as well as the sister game to X-Wing Miniatures. Focused on the Galactic Civil War from the Original Trilogy, the player takes command of either the Star Destroyers of the Galactic Empire or the ragtag fleet of the Rebel Alliance and does battle to claim command of space. The game was released in March of 2015. Since then, it has received 6 "waves" of upgrades, each adding additional imperial and rebel ships and squadrons from the movies and the Star Wars Expanded Universe.

Fantasy Flight Games has a website for the game.