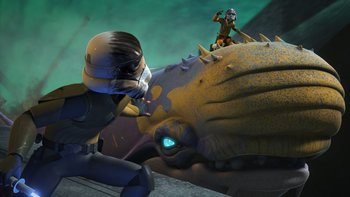 Ezra's having a whale of a time.
The Ghost crew is on their way to attack a mining operation to steal a fuel shipment meant for the Empire, which they themselves desperately need. On the way, they run into a pod of purrgil. Hera, who has lost friends to collisions between the animals and starships, is less than pleased, but Ezra begins to empathize with the animals. Things take a turn for the complicated when the Rebels discover that their initial plan of blowing the whole facility up would do too much harm to the purrgil, forcing them to change their tactic to a more direct approach. But they only have enough fuel for one trip to the heavily guarded refinery, and once they land, they have to succeed at all costs, or they won’t be able to leave.