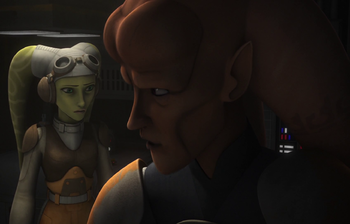 Got some daddy issues, Hera?
Hera: I am not wasting my life. I help people! [switches to Ryloth accent] I lead ships into battle! I am a part of something bigger!
Cham: The Rebellion!? I thought you knew better than to put your faith in outsiders. You forget what happened when we trusted the Republic!
Hera: This is different! The rebels are fighting to free everyone!
Cham: Free everyone? I don't care about everyone! I care only about Ryloth!
Hera: [stops using Ryloth accent] So I've noticed.
Advertisement:

Having taken heavy losses in their fight against the Empire, the Rebels are in need of a carrier vessel to house their fighters. Seeking to catch two birds with one stone, they travel to Ryloth to steal an Imperial carrier that has been sending bombers against the Twi’lek homeworld. To do this, they need to contact the Ryloth rebel cell, led by Cham Syndulla, Hera’s father. This isn’t as simple as it sounds — Hera and Cham haven’t spoken in years, due to a disagreement on whether to fight for the whole galaxy’s freedom or only for Ryloth’s. More complications arise when the two rebel groups’ plans prove incompatible — while the Ghost crew wants to steal the carrier, the Ryloth rebels want to destroy it to give their people something to rally around. Things come to a head when Cham and his followers turn on the Ghost crew, and proceed with their plan to destroy the carrier.

Before a mission to Ryloth, Hera is confronted by her father Cham and a heated exchange breaks out between them with Hera briefly slipping into her Rylothian dialect.

Example of:
Ooh, Me Accent's Slipping

Before a mission to Ryloth, Hera is confronted by her father Cham and a heated exchange breaks out between them with Hera briefly slipping into her Rylothian dialect.