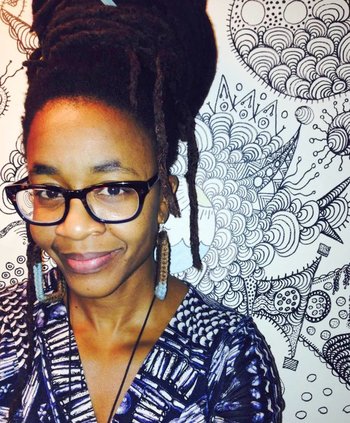 "I would try to write 'realistic' fiction, and someone would fly, or there would be a black hole full of demons or a girl who attracted frogs."
Advertisement:

Okorafor was born in the United States to two Igbo Nigerian immigrant parents. She has a doctorate in English and is a professor at Chicago State University. She is inspired by Octavia Butler, Stephen King, Philip Pullman, Tove Jansson, Hayao Miyazaki and Ngugi wa Thiong'o.

Her first novel, Zahrah the Windseeker, was published in 2005. She mainly writes Urban Fantasy books that are based on Nigerian myths and culture. She also averts most Medieval European Fantasy tropes in her novels, her novels being examples of Africanfuturism.