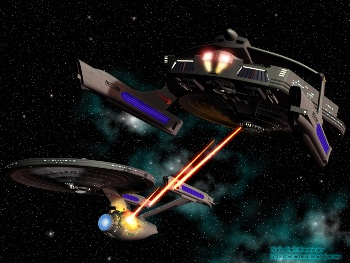 Yarr! Firin' a broadside of Slow Lasers, cap'n!note A scene from Star Trek II: The Wrath of Khan, as digitally rendered by Jim Varner.
"Space battles are always a lot more exciting on TV than they are in real life."
— Col. John Sheppard, Stargate Atlantis
Advertisement:

This is the Supertrope for many tropes and clichés concerning Epic Ship-on-Ship Actionnote and not Ship-to-Ship Combat, which is something else entirely... IN SPAAAAACE!!!

Space Fighters have the Old-School Dogfight; capital ships get this trope instead, and you can think of it as a "Very Old School Sea Fight." Founded on the idea that Space Is an Ocean, it harks back to the age of Wooden Ships and Iron Men, when large warships, making up in fire-power what they lacked in manoeuvrability, pounded each other with cannon fire until one finally took enough damage to be forced to withdraw (or until a lucky shot hit a powder magazine). The honour and military tradition of those long-gone days will often be evoked as well.

It may be The Climax of a tense standoff, the conclusion of a Stern Chase, or the outcome of a cunning surprise attack. Two Cool Starships from opposing Space Navies will park within arm's reach of each other, and proceed to fire broadsides of Beam Spam and Macross Missiles at each other's Weak Spots. The Close In Weaksauce System — if it exists — will valiantly try to intercept enemy attacks, and fail. Deflector Shields will flash and crackle as they slowly drop percentage point by percentage point. The Engineer will rush to prevent Phlebotinum Overloads while avoiding the inevitable torrents of burning steam, providing essential Techno Babble all the way. On The Bridge, Bunnies will shout out damage reports while Explosive Instrumentation claims the life of many a Redshirt Ensign. Everyone flails about as each enemy hit brings on a Star Trek Shake. The Captain will sit stoically at the centre of it all, providing important tactical guidance, such as "Reverse the Polarity!" or "Give me more power!"

In a really dramatic battle, he or she may turn to daring and original plans — attempts at Stealth in Space (to turn the battle into a submarine analogy), aversions of Two-Dimensional Thinking, uncharacteristically creative applications of usually-Misapplied Phlebotinum, etc. Unfortunately, such daring plans will usually Only Work Once.note There may be possible parallels with the History of Naval Warfare here, as well. Famous British admiral Horatio Nelson once shocked the world and revolutionized warfare by discarding traditions and turning to risky new tactics, for example.

Once damage has had some time to accumulate, and the daring plan has had a chance to either work impressively or fail spectacularly, one of the ships will usually find it prudent to invoke the Thirty-Sixth Stratagem and attempt a Hyperspeed Escape. An honourable opponent will let them go; a lowly Space Pirate may get out the boarding hooks instead, and prepare a Boarding Party. If the quarry manages to slip away, there may be a Stern Chase.

If neither side is willing to retreat, sooner or later one of the Cool Ships is likely to suffer a Critical Existence Failure. The crew will scramble for Escape Pods at the last possible second (this step can be skipped if there is nobody important on board), and the subsequent Explosions in Space (with optional Planar Shockwave) will fittingly wrap up the action.

Note that such a confrontation need not be an epic Final Battle. Starship Scuffles are routine in Space Opera, and may be used to establish the setting, throw a minor obstacle in the protagonists' path, introduce a villain, or even just provide a lead-in to other, more important parts of the plot. Of course, epic battles in sci-fi settings often will make use of this trope.

When this trope is averted, it will generally be done in one of two ways: Either large ships will engage in Old School Dogfighting, displaying maneuverability usually reserved for Space Fighters, or combat between spacecraft will actually be shown as a completely new kind of warfare, with weapons and tactics shaped by the realities of the outer space environment rather than by the Rule of Cool or naval parallels. Some of the earliest space battles on what is considered the Ur-Example (see the photo at the top of the page) actually more resembled Hot Sub-on-Sub Action due to the fact that the enemy ship was often unseen (at least onscreen) due to distance.

To see the different kinds of ship likely to be involved, inspect the Standard Sci-Fi Fleet. If the ships are Battlestars, this trope may occur side-by-side with Old School Dogfighting. This trope is not to be confused with Space Battles, though there is certainly overlap.