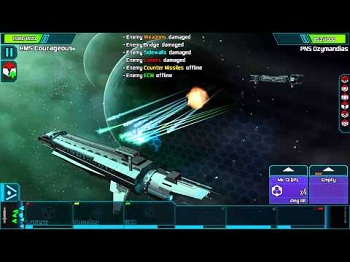 This is gonna hurt...
Advertisement:

Tales of Honor: The Secret Fleet is a 2014 game developed for iOS and Android and set in the Honor Harrington universe. The game takes great liberties with the franchise but ties into the main series.

A rogue gravity wave takes the HMS Galahad, a destroyer in the service of the Star Kingdom of Manticore, to a region of space far from The Alliance. Damaged and with its captain dead, the Player Character is put in command. Forced to fend off Space Pirates and local warlords, the Galahad is eventually repaired with scrap material from the destroyed enemies. After leaving the sector via a wormhole, the crew is transferred to the light cruiser HMS Courageous, tasked with tracking down the titular Secret Fleet, which turns out to be working for the People's Republic of Haven, as their second prong in a plot to take the Basilisk Station in the first Honor Harrington novel. After stopping the fleet and following its remnant with Captain Honor Harrington herself (aboard the HMS Fearless), the player is given the heavy cruiser/Q-ship HMS/HMAMC Dauntless and sent to stop the trade of genetically-engineered slaves on the outskirts of the Solarian League. After that, you are temporarily transferred to a ship made to look like the legendary Space Pirate ship The Blackavar to participate in a war game with another Manticoran ship near Havenite space. However, the war game is interrupted by your opponent's ship suddenly heading deep into Havenite space, its captain apparently having chosen to defect. You are forced to fight through waves of enemies, both Havenite and Rantech. Eventually, you get the option of trading in your pirate ship for a less conspicuous Havenite battlecruiser, the PNS Coronado. As it turns out, the defecting captain is in league with Haven's Internal Security and plans to detonate a gravity bomb at the Trevor's Star wormhole terminus, kicking off the Havenite-Manticoran War early. With Lester Tourville's help, the plot is foiled, leaving for the player to face off against a top-of-the-line Manticoran ship in an old Havenite tub.

The main game has 2 views: ship view and sector map. In the ship view, the player is able to upgrade the ship's four officers (XO Hasting Locke, Chief Engineer Deidre Grace, Tactical Weapons Miranda Stark, and Tactical Defenses George Weatherly) and view the general status of the ship's main systems. Additionally, the player can view the ship's stock of missiles and unused equipment. The main "currency" in the game is metal, plasma, and prestige, although only the first two are necessary to play the game (prestige is the "speed up" currency that can be purchased for real money but can also be earned in some battles). When viewing individual main systems (Bridge, Counter Missiles, ECM, Engineering, Lasers, Sidewalls, Weapons), a top-down room view allows the player to manage the equipment installed there. This equipment is most frequently received as salvage (i.e. loot) from destroyed enemies but can also be purchased on Space Stations. Equipment can be upgraded several levels, and higher-level equipment has a higher upgrade cap. Equipment must be connected to the main system by power conduits which can be purchased at space stations. Additionally, after battles where critical damage was sustained, one ore more main systems can have fires that must be put out by the player.

The sector map shows the view of the current sector in the storyline. New missions are unlocked by completing the previous battles. Random side battles are also available. Traveling to new planets (i.e. missions) uses up warp points that periodically refill or may be purchased for prestige. Some side quests are unlocked after completing a number of certain random missions.

Battles are always one-on-one, no matter what the pre-battle text states. Even in battles with multiple opponents, you always fight each one in turn. Prior to the battle, the player can select one of three randomized bonuses. There is a fourth bonus option, but it must be purchased with prestige. The battle itself consists of the two ships hanging in space over a cool orbital backdrop and firing broadside missile volleys at one another. The number of missiles the player's ship can fire depends on the number of missile batteries and the Weapons upgrade level. The damaged HMS Galahad only has one operating missile battery, meaning only a few missiles can be fired at a time. After repairing it, a second missile battery becomes available, allowing the player to either fire more missiles together or stagger the launches. The HMS Courageous also has 2 missile batteries but has a higher Weapons upgrade cap, allowing for more missiles per salvo (The Blackavar has a lower cap but a significantly higher reload rate). The HMS Dauntless, The Blackavar, and the PNS Coronado have 3 missile batteries, and also have a very high Weapons upgrade cap, allowing for truly huge volleys. All ships have sidewalls as a last line of defense, although they shouldn't be relied upon to stop anything more than a few missiles. They are also useless against bomb-pumped lasers and antimatter missiles. Ships can also roll to present their dorsal impeller wedges to stop all enemy missiles for a few seconds. The three active defenses are lasers (innermost), counter-missiles (middle), and ECM (outermost). These can get rid of most enemy missiles depending on the number of missiles and their types but must be manually activated when enemy missiles pass through their area of effect. Certain missiles are immune/resistant to specific defenses and are designed to damage those particular systems.

There are eight types of missiles in the game used by everyone. Hull Penetrators (white) are the run-of-the-mill "slammer" missiles that damage the hull and nothing else (unless upgraded by a temporary bonus or certain equipment); they are the only unlimited missile type. Laser Disruptors (red) are immune to laser defenses and damage those defenses. NX-2 Nukes (pink) are Hull Penetrators taken up to eleven, although they do significantly less damage if enemy sidewalls are up. Mavericks (yellow) are immune/resistant to and damage counter-missile defenses. Mk 13 BPLs (purple) ignore sidewalls and heavily damage all systems. M-14 Hellfires (orange) damage enemy weapons. EMP Pulsors (green) are immune to and damage ECM defenses. M-1 Antimatter (blue) missiles ignore and damage enemy sidewalls. The missiles are Color-Coded for Your Convenience, requiring the player to quickly figure out which defenses to deploy against which missiles, especially since defenses take time to recharge.

A PvP mode was added in an update, allowing players to select a multiplayer ships from the three options (it's possible to change the ship later, but only using Prestige). This ship is separate from the single-player one, but both ships share the equipment and missile stores, so equipment obtained in the campaign can be used in multiplayer battles and vice versa. When a player taps the "Play" button, the game searches for other players of similar level who are also searching. If none are found within 20 seconds, then the player has the option of facing off against a computer foe instead. Fleeing from a battle or getting disconnected counts as a loss (but XP is not taken away for a loss). If a battle lasts long enough, Sudden Death mode kicks in, periodically shutting down the defensive systems of both ships to bring about a quicker end to the match.

The game has been abandoned by the developer and is no longer available on the App Store.