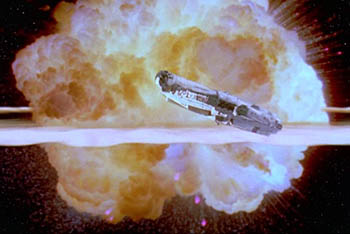 Complete with a Planar Shockwave.
A subtrope of Artistic License – Space.
Advertisement:

In reality, space has no air to transfer the explosive energy to. Thus, explosions would have an initial brilliant flash, and the resulting spherical

fireball and debris would travel away from the point of explosion far too fast for the eye to see. Do note that without any atmosphere or gravity to act on the debris, it will continue on at full speed until it hits something, meaning such an explosion could actually be more dangerous than it would have been in an atmosphere.

Nuclear explosions would be similar, but with a much brighter flash, and little or no visible debris since it would be vaporized.

Explosions in vacuum on the surface of a planet, moon, asteroid etc. will look similar to those in zero-g, but any debris that does not achieve escape velocity in the local gravity field will arc back down and rain to the surface. In low gravity, this could take minutes or even hours.

Further, if a spacecraft blows up, the explosion should have the same velocity as the craft did (possibly altered by the velocity of whatever hit it). I.e., the boom should keep moving. Many movies and shows have a fast-moving craft turn into a stationary explosion (relative to the camera).

Above all, explosions in vacuum would be silent.

In many cases, this is caused by the method of special effects: actual pyrotechnics in an atmosphere. It should be noted that this is generally considered an Acceptable Break From Reality by the majority of the audience. Some works even try to find ways to work around it. One way is fictional elements used as fuel for ships, which are very flammable.

Many Hollywood Explosions In Space will also include a Planar Shockwave.

This is such an ubiquitous trope that only aversions and subversions should be listed.