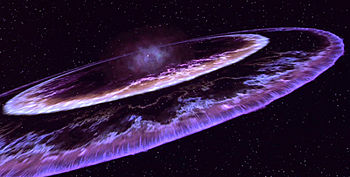 Huge explosions in space turn into fireballs surrounded by unexplained rings of fire/plasma that expand usually on the relative horizontal or vertical plane, often racing just past the camera. Used to make big kabooms (especially those that blow up whole planets) appear more powerful, and when spheroid shockwaves just won't do.

Perhaps this is done because the expected near-spherical explosions don't feel as big, or because a two-dimensional shockwave resembles that of powerful explosions on earth. In theory, it could be Hand Waved by being an effect of the method of Artificial Gravity, or some kind of rotating generator exploding, or plasma trapped by some great magnetic field... but it usually just gets a pass due to being an awesome visual.note It should be said that a shockwave is something produced by the force of the explosion pushing air away from the epicenter of the explosion. Since there is no air in space, it is theoretically impossible for a shockwave to propagate.

Very commonly used in space-based video games, as it is a relatively "cheap" and easily produced effect.

Count on the hero's Cool Starship to be directly in its path by apparent coincidence, allowing him to Outrun the Fireball.

Note: a spherical shockwave that is relatively transparent would look like a planar shockwave viewed from a perpendicular angle; done that way it is not this trope.