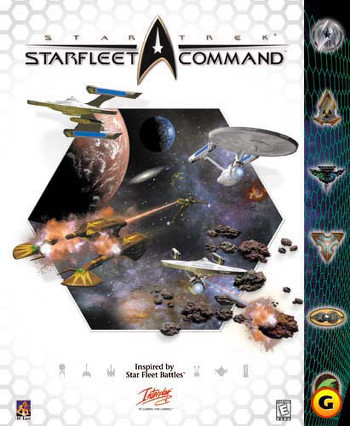 A series of space combat/strategy games initially developed by Interplay Entertainment/Taldren and later by Activision that took Star Trek's Space Is an Ocean sensibilities and ran with them full-steam ahead. Initially inspired by the pen and paper/board game Star Fleet Battles during Interplay's time as developer. When Activision took over for Starfleet Command III, the game shifted from the period of The Original Series to the Next Generation era, and took an approach to the ships and gameplay that more reflected Trek Canon.

The first and second entries focus on conflicts from the various Star Fleet Battles campaigns, while Starfleet Command III is a prequel to Star Trek: Nemesis. The first and third games have been re-released through GOG.com.