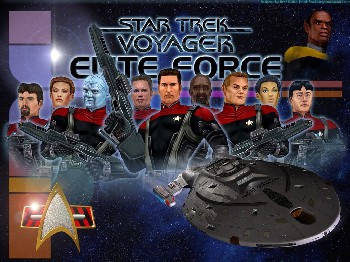 The Hazard Team... and Tuvok
"SET PHASERS TO FRAG!"
— tagline for the first game
Advertisement:

From the fine folks at Raven Software and Ritual Entertainment, a series of FPS games set in the Star Trek: Voyager universe. It follows the adventures of a beefed-up redshirt squad who tackle assignments and challenges too tough or dangerous for standard Starfleet away teams. There have been two games (plus one expansion) in the series:

Stranded in the far reaches of the galaxy, the USS Voyager is in a precarious predicament, and Federation rules might not apply. And so, Chief of Security Lt. Tuvok takes it upon himself to form the Hazard Team, a rigorously-trained group of bona fide space marines who can handle the toughest and most dangerous missions. And that expertise will be needed forthwith; Voyager finds herself ensnared in a starship graveyard, unable to escape. The Hazard Team must travel from ship to ship, searching for clues (and fighting off hostile aliens), and find a way to free Voyager.

Picking up with Voyager's Grand Finale, the Hazard Team's first mission involves freeing Voyager (again) from a Borg sphere so that she can return triumphantly to the Alpha Quadrant. You'll all be heroes—
Oops, upon returning to Starfleet, the first thing that happens is the disbanding of the Hazard Team. Fortunately for Alex Munro, he catches the eye of one Jean-Luc Picard, who promptly reforms the Hazard Team and transfers them to the Federation flagship, the Enterprise-E. And just in time, too — there seems to be some sort of invasion of strange, savage aliens. Tracking these aliens to their source will lead Munro and his team to lost alien civilizations, ages-old feuds, the Alpha Quadrant's seedy underbelly, and good old fashioned political intrigue. All while blasting savage aliens to protoplasm.

These were, for a long time, generally regarded as the best of the Star Trek videogames, especially of the large wave that came in the period between 1998's Insurrection and 2002's Nemesis; they still may not capture that wonder of exploration and the moral questions that Trek is famous for, but they capture the rollicking action and adventure of the movies very well. Even today, they're still very solid shooters that manage to translate what was seen on the shows into good gameplay, although the id Tech 3 engine has not aged as gracefully as some other games, particularly in the first game's case. Elite Force II also has the distinction of being one of the last major FPS to use the Quake III engine - the only other high-profile games to use it afterwards being Call of Duty and Everything or Nothing - and is probably the most advanced example of a game on that engine.

These video games provide examples of: