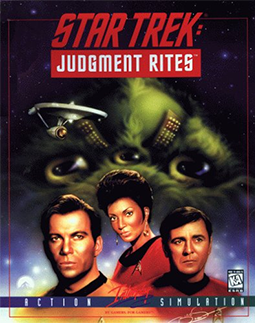 Star Trek: Judgment Rites was the second Adventure Game based on the Star Trek franchise, developed in 1993. It is a sequel to the successful Star Trek: 25th Anniversary, following the same concept: a surprisingly-faithful continuation of The Original Series in video game form.

As in the previous game, Judgment Rites is split into several "episodes", each consisting of a lengthy away-mission played as a Point-and-Click adventure.note  A few episodes also include a short space-battle played as a Faux First Person 3D space simulator, though in this game it is possible to skip combat altogether. Judgment Rites uses the same design as its predecessor, but introduces many improvements in content - primarily the inclusion of Scotty, Chekov, Sulu, and Uhura into the adventure portion of the game. As in the previous game, the CD-ROM version is fully voiced by the original cast in their respective roles.note In fact, this was Deforest Kelley's last ever performance as Dr. McCoy.

Each episode tells a single story, written in the style of the Original Series. For instance, in the first episode the Enterprise crew witness a ship coming through a rip in time, which warns them of the impending destruction of the Federation — Which they then need to avert. In another episode, a creature called Trelane, a omnipotent spoiled brat (and familiar character from The Original Series) decides to pull Kirk and the rest of the ship's crew into a fantasy-world depicting a romanticized Germany in the midst of World War I. The meat of each plot unfolds in Adventure Game mode, where Kirk and company must converse with each other and with NPCs, use items to interact with their environment, and finally solve the problem at hand and bring the episode to a close in one way or another.

Unlike its predecessor, Judgment Rites also includes a Story Arc that runs through most of its episodes: An alien species is attempting to make first contact with the Federation and the Klingon Empire and is peppering the plot with various tests to determine whether to establish diplomatic relations with either government. This culminates in the last two episodes in the game, where Kirk and his crew are being explicitly tested.

On the whole, Star Trek: Judgment Rites is considered superior to its predecessor in every way despite running on the same exact game engine. This was mainly due to the writing of the episodes, the over-arching plots, the ability to control people other than Kirk, Spock and McCoy, and the ability to tone down the space-combat portion (which was Nintendo Hard at times during the first game).

Having demonstrated the potential for Star-Trek-based adventure games thanks to their success, 25th Anniversary and Judgment Rites opened the way to the release of the Next-Generation-based A Final Unity.