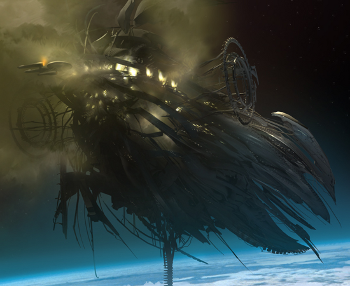 One gets the impression Star Trek (2009)'s production designers would have rather made a Warhammer 40,000 movie instead...
"...something astonishing and strange had happened to Volyova’s ship. The ship had remade itself into a festering gothic caricature of what a starship ought to look like... He had heard of ships being infected with the Melding Plague... but he had never heard of a ship becoming so thoroughly perverted as this one while still, so far as he could tell, being able to continue functioning as a ship."
— Clavain describing the Nostalgia For Infinity, Redemption Ark
Advertisement:

The polar opposite of Standard Human Spaceship, and alien beyond even the smooth lines and flashy colors of the Standard Alien Spaceship, these are spacecraft, time machines, and/or interdimensional vehicles whose weirdness goes beyond Living Ship into the mobile version of an Eldritch Location.

The milder form of this usually begins with Bigger on the Inside or dimensionally transcendent in some way other than bog-standard Faster-Than-Light Travel, and it only grows weirder from that point on. May involve Body Horror or invoke elements of Cosmic Horror Story.

They might be constructed out of unconventional materials (or powered by them), be connected to higher levels of reality, or have an exceptionally Unusual User Interface or an otherworldly interior whose Alien Geometries look like they were designed by M. C. Escher. There's no guarantee that the crew or the ship itself won't change its interiors (or even its exterior) from time to time. Frequently they are a Genius Loci or function as a Setting as a Character. These are, in essence, "Starfish" Starships — ships based on Starfish Alien technology — whose conceptual design and performance seem to defy the very laws of physics.

Note that this trope is mostly a matter of function rather than form: even a ship that superficially looks like a Flying Cutlery Spaceship, a Lovecraftian mass of antennae and spikes, can still be physically possible, and thus not necessarily this trope.

For other Lovecraftian perversions of metallurgy, see Mechanical Abomination, with which this trope is known to overlap.