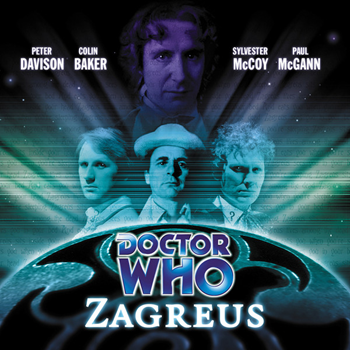 "He's Zagreus, he's Zagreus, you're Zagreus?!? ... I'M ZAGREUS! Are there any other Zagreuses I should know about??" note "Me, Zagreus himself!"
Advertisement:

The one where the Doctor is become... ZAGREUS!!!

A 40th anniversary story for Doctor Who, and the 50th Big Finish Doctor Who audio. Written by Gary Russel and Alan Barnes, it is notable for featuring the actors who play five Doctors and 18 companions.

The TARDIS is having a bad day. First of all, the Eighth Doctor made her contain a mass of leaked anti-time, and it exploded inside her. Secondly, this caused Zagreus, who shouldn't even logically exist, to come into being and to fully merge with her Doctor. And now Zagreus is stalking through the TARDIS after hitting Charley in the face, slamming doors, growling, and going completely mad.

With the Doctor and Zagreus fighting for dominance inside one single body, and both being hit hard with panic and extreme loss of identity, the TARDIS manages to delete the door between her inner rooms and her control room. She steers a conscious part of the Doctor's mind towards a ball of shiny light, and distracts Zagreus with many a "divergence": a copy of Alice's Adventures in Wonderland from the library, bits of philosophy, Cheshire cats, Schrödinger's Cat, lead boxes, trees falling in forests, questions, ramblings and death traps. She projects herself to him as the Third Doctor (using archival voice clips from "Devious"

) and then goes to see Charley, who is cowering in the console room.

Charley's having a bit of a confusing day as well. She's suddenly back with her mother, and finds herself acting out bits and pieces of Alice's Adventures in Wonderland while turning into a bunny rabbit. And her mother's taking her to a Doctor named Zagreus. Except that this Dr. Zagreus looks and sounds exactly like her friend the Brigadier. And is actually another manifestation of the TARDIS. The TARDIS explains that since Zagreus can never enter the outside world, the TARDIS and her Doctor will simply have to spend the rest of their lives together — possibly billions of years. Possibly forever.

The TARDIS takes Charley into three hologram re-enactments of important events: A reverend obsessed with humanoid evolution (Peter Davison) in the Cold War accidentally opening a rift in time and space; a spy of an ancient vampire race (Colin Baker) attempting to assassinate Rassilon for stealing regeneration from his species; a Mr. Alt Disney (Sylvester McCoy) waking up from cryogenic sleep in his Gallifrey theme park and realising that billions and billions of years have passed and that a rift in time and space is right is front of him. Charley finds herself forced to take on the parts of a Corporal, of Rassilon, and of a Mickey Mouse Expy in these stories, still mixed up rather confusingly with Alice's Adventures in Wonderland as well as with her memories. The TARDIS, still appearing as the Brigadier, watches and learns. It's revealed that when Rassilon created time travel and regeneration, he also spread the Gallifreyan genotype throughout time and space, so as to promote "healthy" bipedal races and create a better universe. The victims of his Evilutionary Biologist scheme were the Divergence, a race (or species, or perhaps a genus...) whose evolutionary branch was quietly muffled away in a space-time Moebius strip by Rassilon. Charley is tremendously confused by all this.

Meanwhile, Lady President Romana of Gallifrey is dictating a novel she's writing to K-9, about a thinly-veiled Doctor Expy ("Sigma") who fights monsters. After a phone call (and gratuitous cameo) from the Doctor's brother, Irving Braxiatel, she meets Leela for the first time and they head off to see what the hell is going on.

Zagreus and the Doctor, still one person, are still going mad, panicking hard, and also quite suddenly betrayed by the TARDIS, who has had quite enough of his bullshit at this point. Him always bringing in young girls was bad enough, him forgetting the distinction between love and friendship with Charley was pushing it. But him now having forced her to let anti-time explode inside her after first giving a grand speech about never taking someone else's life, and her being forced to spend forever with a raving mad Eldritch Abomination inside her, not to mention his terrible taste in music... she's absolutely had it. She tells him in very clear terms that she quits. Rassilon has much better plans for her. Plans that involve the part of Zagreus that's in her mind. Because the TARDIS is definitely Not Herself today. Just as Zagreus has merged with the Doctor's mind, Zagreus is also the TARDIS. She casts Charley out of her, into certain death. The Doctor wants to save Charley's life, but he can't leave the TARDIS, for fear of inflicting Zagreus on the world... so he watches Charley disappear into the distance. She ends up in what seems to be the Death Zone and is forced to play the Game of Rassilon with Peter Davison, Colin Baker and Sylvester McCoy. All of whom have odd memories of being the Doctor seeping through into their minds.

Rassilon gives the TARDIS a new body and destroys her old one, melting it down in the Foundry of Rassilon. The shock of seeing that traumatises what's left of the Doctor and allows Zagreus to take over almost completely. Rassilon begins talking Zagreus into controlling anti-time for him. Because Zagreus is not a product of anti-time. Zagreus is its master — which Zagreus himself, who didn't exist before this day, is quite happy to find out. Romana, Leela and K-9 look on in horror. Zagreus uses the Forge of Rassilon to create a makeshift Vorpal Sword of anti-time out of what's left of the TARDIS' body. Rassilon is ready to depose Romana (by force, if he has to) — he picked Leela specifically for this adventure because, not being a Time Lord, she's easy to hypnotise and can bypass all the psychic sensors. Rassilon wants to replace Romana with Zagreus as president. Because Zagreus can travel freely into the Divergent universe and, using an anti-time Vorpal Sword, murder every last Divergent alive to secure the existence of the Time Lords. One thing Rassilon never counted on, however, was that Zagreus has calmly watched the history of the Divergence when Charley lived out those three scenarios... and is pissed. Zagreus easily overpowers Rassilon and casts him into the Divergent universe to be torn apart by the Divergence.

When the Doctor (still merged with Zagreus) and Charley are finally reunited, and the Jabberwock can be slayed with the Vorpal Sword, he begs Charley to kill him. Kill him. Kill him. Kill him. Kill him. Because he knows she loves him. Genuinely, really loves the Doctor. Zagreus can tell, too — he can tell how she's secretly thought about the Doctor in the hours before the dawn, how her little human heart ached for him while he was gone. And Charley hopes that he will love her back, as he promised when their roles were reversed. She knows there's no other option, and she kills him with the Vorpal Sword. Peter Davison, Colin Baker and Sylvester McCoy look on, now back to life and still just as imaginary. Their presence makes Charley realise that there's still hope for the Doctor. Because the Vorpal Sword transferred their essense, their imagined memories of being the Doctor, into Zagreus' mind, causing the Doctor side of him to grow strong again. But it's the TARDIS herself, in the end, who overcomes the part of Zagreus that's inside her.

With a little flask of "drink me!", she revives her Doctor and finally (finally) explains what happened: when Zagreus and the Doctor merged, she used Zero Energy (the shiny light ball) to calm the Doctor part of the new mind-merged entity, and used the biggest piece of nonsensical piffle she could possibly find in order to confuse Zagreus: the memories of "Alice in Wonderland" in Charley's mind. A story so confusing that even anti-time itself couldn't fathom it. The timeline of the Divergence is now safe, and the TARDIS absorbs the Vorpal Sword back into herself. The Doctor and Charley are free to go. Romana is tremendously confused and a bit upset that the day was saved using nonsense, but she and Leela are happy to go back to their normal lives, now as friends. They head off to go star in Gallifrey together.

The Doctor realises that Zagreus is still merged with him on some level, and that he can never fully be himself again. He hopes to leave Charley on Gallifrey and travel to the Divergent universe together with the TARDIS, to live out his life in peace and solitude in a world without time. Charley disagrees and, with the help of the TARDIS, sneaks aboard as they vworp off.