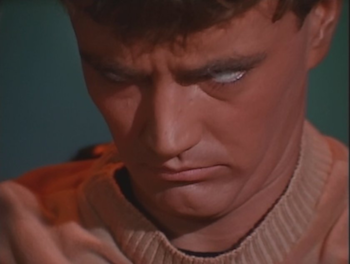 If Charlie makes this face, you are unfathomable levels of screwed.
Charlie: Do you know about being with somebody? Wanting to be? If I had the whole universe, I'd give it to you, Janice. When I see you, I feel like I'm hungry all over. Do you know how that feels?
Advertisement:

The Enterprise takes on a passenger, being that they are commonly in the habit of ferrying civilians. The boy is Charlie, an orphan with a Mysterious Past and really bad social skills. The people dropping him off seem in quite a hurry to leave.

Charlie becomes infatuated with Yeoman Rand, stalking her and delivering presents she doesn't want. In the rec room we get to see Spock and Uhura make music together, which annoys Charlie because it distracts everyone (and especially Yeoman Rand) from him.

The ship Charlie arrived on blows up mid-transmission, with Charlie making a snide remark. Everyone is somewhat concerned, especially as odd things continue to happen upon the ship. For instance, Charlie loses chess and causes the chess pieces to melt. Nobody connects this to him (yet). Kirk is given the responsibility of talking to the boy and attempting to explain how to be normal.

Which he does by teaching him to wrestle. (Obviously.) When Kirk's training partner laughs at Charlie, Charlie makes him disappear. Kirk is upset and orders him to his quarters, where he goes after making several threats. Charlie goes on a rampage when Kirk refuses bring him to the human colony he was planning on going to. The aliens that taught Charlie his powers appear to take him back, apologizing for the damage he's caused. He is brought back to live with them and the people that were attacked are brought back to normal.

Nichelle Nichols gets a chance to show off her singing talent.

Nichelle Nichols gets a chance to show off her singing talent.