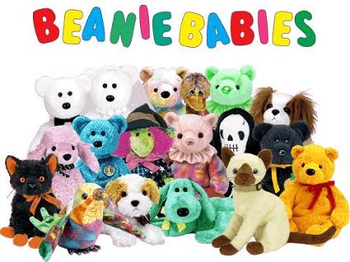 Beanie Babies are a long-running franchise of stuffed toys manufactured by Ty, Inc., owned by Ty Warner. Although the company already had a couple plush toy lines at this point, Beanie Babies slowly caught on in the 1990s, starting with a line of nine originals in 1993: Legs the Frog, Squealer the Pig, Brownie the Bear (later known as Cubbie), Flash the Dolphin, Splash the Orca (originally a whale), Patti the Platypus, Chocolate the Moose, Spot the Dog, and Punchers the Lobster (later known as Pinchers). What distinguished the Beanie Babies from other stuffed toys was that, instead of having "stuffing," they were stuffed almost entirely with polyvinyl chloride (later polyethylene) "beans," although the heads were still typically stuffed.
Advertisement:

The toys were not incredibly popular at first outside Ty's home market of Chicago. Starting in late 1995-early 1996, the line suddenly grew in popularity, in part due to the marketing strategies of selling them only at small gift shops for $5-$6 each. Furthermore, the company began regularly retiring existing Beanies and introducing new ones. Adding some fuel to the fire was the introduction of the first exclusive-release Beanie, Maple the Bear (sold only in Canada). It was also in 1996 that the toys first included birthdays and short, four-line poems on their tags. In 1997 through 2000, McDonald's jumped on the bandwagon as well, including fun-size "Teenie Beanies" with Happy Meals.

The Beanie Babies franchise remained popular into the 2000s, including an incredible stunt in 1999 when a bear named "The End" was released and Ty decided to let collectors decide whether or not to end the entire line.

Throughout the 2000s, the Beanie Baby franchise did see some decline in popularity, but the toys are still sold, played with, and collected. There are still plenty of retired Beanies who can fetch a pretty penny on the market these days.

The big kids craze after Pogs and before Pokémon.

Not to be confused with Beanie Kids, an Australian toy.