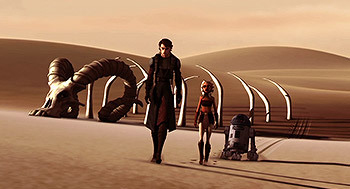 Here lies the mighty bantha, killed by its own body weight.
Advertisement:

Like an oddly-colored sky with multiple suns or moons, this is one of those surefire ways of letting the audience know that the story has taken them to a world vastly different from our own. Just stick a ginormous monster skeleton somewhere in the scenery, and presto, instant otherworld! Interestingly, the heroes almost never encounter a living monster of that type, or one in an earlier state of decay. Sometimes, dinosaur bones may be substituted to indicate another time period instead of another world entirely.

This often overlaps with Alien Landmass, as both involve the use of large, unearthly landscape features to symbolize that a story is moving through realms unlike our own. See also Saharan Shipwreck, Desert Skull, Ribcage Stomach and Elephant Graveyard. For a much larger version of this concept, see Giant Corpse World. When the huge creature in the background is still alive, see Monstrous Scenery; overlap is possible if the being is undead.