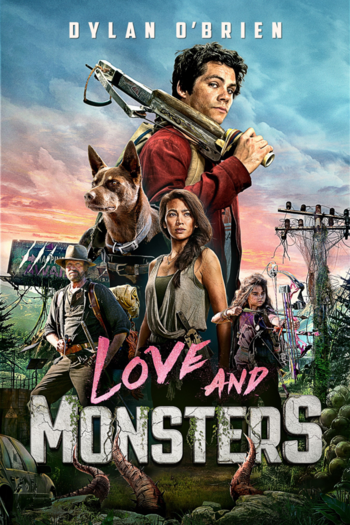 "I really didn't have your typical upbringing. I mean, I did at first and then the world ended."
"I love you guys, but there's one person in this world who ever truly made me happy, and she's only 85 miles away. And I'm gonna go see her."
— Joel Dawson
Advertisement:

Love and Monsters is an American monster adventure film, starring Dylan O'Brien, Jessica Henwick, Dan Ewing, Michael Rooker and Ariana Greenblatt. It was release simultaneously on VOD and in select theaters on October 16, 2020.

After a successful attempt to stop an asteroid from hitting the Earth, the remains of the explosion drift down and mutate all cold-blooded and invertebrate life into monsters. Teen lovers Joel and Aimee are separated by the apocalypse and vow to one day again find each other. Humanity escapes to underground colonies.

Seven years later, Joel is living in a colony and speaking to his girlfriend on the radio at another colony. He decides to brave the surface to return to her.

Not to be confused with the Doctor Who episode of the same name.

"Oh, and one last thing. Don't settle. You don't have to. Not at the end of the world."