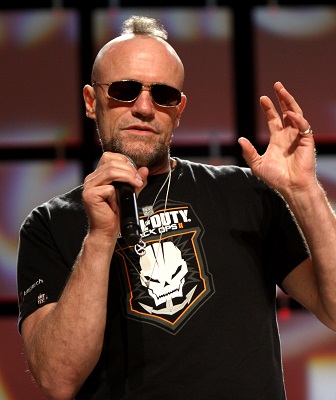 "I don't approach a role by saying I'll be unsavory or unlikable. I think all the roles I've done have been very passionate people who go to absolute extremes to make their points."
Advertisement:

Michael Rooker (born April 6, 1955) is an American actor, best known for his roles as Henry in Henry: Portrait of a Serial Killer, Merle Dixon in The Walking Dead, Frank Bailey in Mississippi Burning, Hal Tucker in Cliffhanger, Rowdy Burns in Days of Thunder, and Yondu Udonta in Guardians of the Galaxy. He is originally from Jasper, Alabama.

On first breaking into film, his intensity and "don't-mess-with-me" good looks were highlighted to chilling effect as the title character in Henry: Portrait of a Serial Killer, filmed in 1986 but not released until 1990 due to its controversial nature. Since that widely noticed and highly praised performance, much of his career has been spent playing brutes, villains and psychopaths. His occasional turns as a "good guy", however, are always well-acted and a welcome change for a talented actor too often typecast.