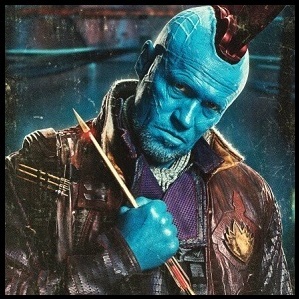 "When I picked you up as a kid, these boys wanted to eat you. They ain't never tasted Terran before. I saved your life!"

A jovial and ruthless leader of a band of Space Pirates called the Ravagers, who abducted (and eventually adopted) Peter Quill when he was just a boy.

open/close all folders
Tropes # to H

Tropes I to Y