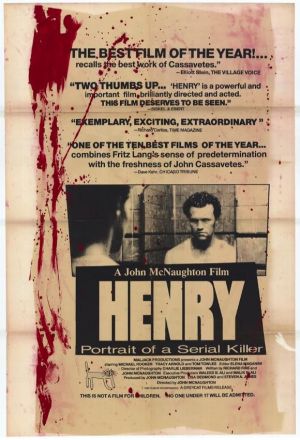 "Yeah, I killed my Mama."
Advertisement:

Henry: Portrait of a Serial Killer is a controversial 1986 slasher horror film that follows the exploits of a serial killer named Henry.

The film starts out with a girl named Becky, who just got out of a tough relationship with her convict husband and heads to Chicago to make some money for herself and her brother. She's staying with her brother Otis Toole who has taken in Henry Lee Lucas as a house guest. Becky and Henry share troubled pasts, which gives them a somewhat romantic connection while Henry and Otis begin a bond based on their shared desires for random violence and go on a killing spree.

The film is notable for two major reasons; 1) launching the career of then-unknown actor Michael Rooker and 2) its extreme violence and rape scenes that caused a huge amount controversy with the MPAA and lead to several different edits of the film in the UK as well as on home video.

A sequel, titled Henry II: Portrait of a Serial Killer, was released in 1996. Set several years after the original, it has Henry shack up with a dysfunctional family headed by an unhinged arsonist named Kai.

"Henry: Tropes of a Serial Killer"