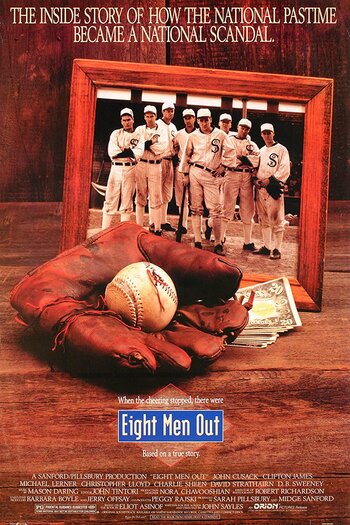 "Say it ain't so, Joe."
Advertisement:

. Directed by John Sayles and starring John Cusack, Charlie Sheen, D.B. Sweeney, and Christopher Lloyd. The movie was adapted from the 1963 historical book by Eliot Asinof.

It's the early Golden Age of professional baseball, and one of the best teams of the era is the Chicago White Sox led by a great young home run hitter known as Shoeless Joe. However, all is not well: the players are treated horribly by their spendthrift team owners and paid meager salaries while they see millions of dollars being generated - not just by the owners but also the gamblers betting on their games - off of their work.

Outraged by a particular slight from their owner Comiskey before the start of the World Series, a number of White Sox players decide to listen to an offer from small-time gamblers on the idea of throwing the entire World Series - which the bookies are setting up as an easy Sox win - and then getting a cut of the action when those bets pay off. The problems quickly become apparent: More players have to be brought into the scheme to make it work, and the small-time gamblers need bigger financial backers - like say mob boss Arnold Rothstein

- to pull off the big bets. Player Buck Weaver finds out and tries to talk his teammates into stopping the scheme before it gets worse. On top of all this, two intrepid reporters - Ring Lardner and Hugh Fullerton - grow suspicious about the rumors they're getting about skewed bets placed against the favored White Sox, and they start tracking questionable plays during the Series...

This movie contains examples of these tropes: