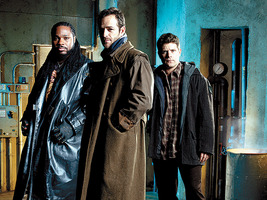 The Badass Longcoat Brigade
"What did any of us ever do to you? What did the whole fucking world do to you that we deserve all of this? I mean, come on, the locusts and the death of the first-born wasn't good enough for you anymore, so now it's the death of the eldest? The death of heroes? You know what? Fuck you. Because we're not just gonna lay down and die down here. You want to finish off the job? Come down here! Do it yourself. You send the Angel of Death, you better give him one hell of a big sword, because I tell you what, we are gonna kick his ass all the way back to the great white fucking throne. And then we're coming for you."
—Jeremiah, to God
Advertisement:

Jeremiah is a Post Apocalyptic television series that aired on Showtime from 2002 to 2004. It was (very loosely) adapted from the French-Belgian comic book series Jeremiah. It was directed by J. Michael Straczynski and starred Luke Perry and Malcolm-Jamal Warner. The series ended after two seasons when JMS quit, citing too much Executive Meddling on the part of MGM, and the network elected not to continue without him.

In the early 21st century, a supervirus known as "the Big Death" was unleashed across the planet: highly communicable, short incubation period and one-hundred percent fatal to anyone who had reached the age of puberty or higher. Within six months, the population had been decimated and the only survivors were the pre-pubescent children, who somehow had to rebuild a society they never fully knew. Fifteen years later, one such survivor is Jeremiah (Perry), who travels between the rural, low-tech communities that have cropped up in the intervening years and searches tirelessly for something called "Valhalla Sector", a place his father once spoke of as a possible refuge against the Big Death.

During his travels, Jeremiah befriends fellow wanderer Kurdy (Warner), colony leader Markus Alexander (Peter Stebbings) and possible prophet Mr. Smith (Sean Astin), and gets caught up in an attempt to rebuild the United States of America, a brewing conflict with those who'd attempt to seize power for themselves and a possible recurrence of a new and even more dangerous plague.