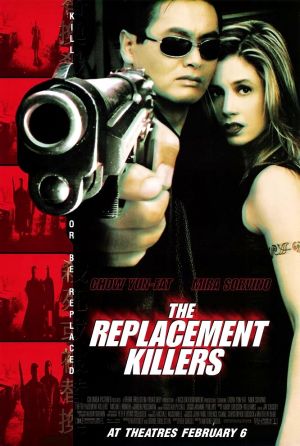 The Replacement Killers is a 1998 action movie directed by Antoine Fuqua in his directorial debut and co-produced by none other than John Woo.
Advertisement:

The film follows Hitman with a Heart John Lee, played by Chow Yun-fat in his first major Hollywood role, as he seeks to clear a debt with ruthless Triad crimelord Terence Wei (played by Kenneth Tsang) by killing his enemies. Unfortunately, the last contract is one that Lee cannot go through with — killing a cop's young son in revenge for the death of Wei's own son, a Triad lieutenant, in a police shootout.

Wei is pissed that Lee could not complete the contract, and not only seeks to kill him, but hires replacement killers in order to finish the job that Lee could not. Worse, he also has his men in China start looking for Lee's family to take revenge upon them as well. Lee seeks to ensure his family's safety by having them moved to a secure location, and for this purpose enlists the help of skilled forger Meg Coburn (Mira Sorvino) to create a new passport for him. The two soon have to deal with not only the assassins sent to kill Lee, but the replacement killers sent to kill the cop and his son, as well as finding a way to stop Wei from exacting horrible vengeance against Lee's family.