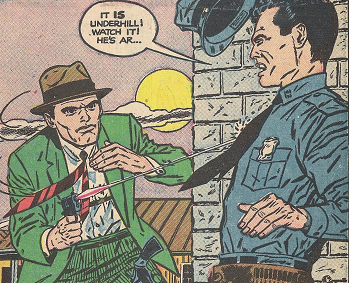 Street: Another officer is dead because you shot your mouth off.
Montel: That's how I like cops — dead ... He knew the dangers, no? That's why he signed up to be a police officer. Carry a gun in the Wild West — like you, Cowboy. Would you be sitting here if this job wasn't dangerous? Huh? Anyway... killing him probably got you 20 new recruits. You should thank me.
— S.W.A.T.
Advertisement:

"Officer Down!". The two words that haunt every police officer's nightmares.

A staple of the Criminal Procedural when the writers want to create a "This Time, It's Personal" episode. Pretty much Exactly What It Says on the Tin: a criminal kills a cop and the dead officer's colleagues have to avenge him via a Cop Killer Manhunt. These episodes frequently end with Police Brutality, as cop killing is very serious business. When the cops find the cop killer, they don't treat him very well. Not to mention that they're more likely to have "accidents" or be "driven to suicide" at some point between arrest, trial, and imprisonment. Or even just make no effort to capture the cop killer alive in the first place. Conversely, a cop killer will likely be regarded as particularly notorious by fellow criminals (which may very well be why the cop killer does it in the first place).

If the criminal is purposely going after cops who previously arrested him, this can overlap with Rage Against the Legal System. Other times, cops may be killed in the line of duty by trigger-happy criminals. Of course, they're in particular danger if they're three days away from retirement. May also be done by a Cop Hater.

While this is often a villain trope, there are cases that this trope may be applied to an Anti-Hero or a vigilante (particularly if the character suffered some form of Police Brutality that would result in the Anti-Hero or vigilante hunting down cops as well). If The Bad Guys Are Cops this may be one way for them to meet their fate. Still, it's very rarely condoned, even if opinions about the sanctity of cops are declining.

The inverse of Killer Cop, a cop who is a murderer, although in some cases they do overlap. Particularly with cases of a Dirty Cop killing an honest one who's discovered his crimes, or the local Vigilante Man making an Asshole Victim of a Killer Cop. See also Police Brutality and Pay Evil unto Evil, possible reactions by the police when they find the cop killer.

No Real Life Examples, please. We all know this happens in real life; there is no need to go into specifics.

Grimm, a notorious serial killer, invades the Capital Police Department's London HQ and shoots uniformed officers left and right. A special mask allows him to hide and avoid being caught.

Grimm, a notorious serial killer, invades the Capital Police Department's London HQ and shoots uniformed officers left and right. A special mask allows him to hide and avoid being caught.