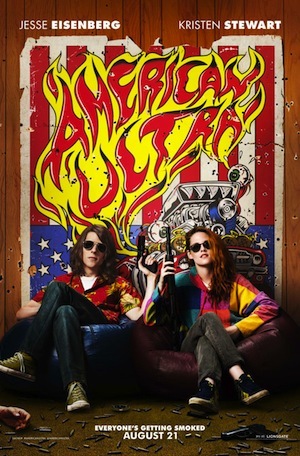 Mike: Babe, I just killed two people!
Phoebe: Did you call the cops?!
Mike: No, I did not call the police, since I'm the murderer, and because I have, like, a lot of weed and mushrooms in my car...
Advertisement:

American Ultra is a 2015 comedy/action film starring Jesse Eisenberg and Kristen Stewart, about a pot-smoking convenience store clerk who finds his world change in an instant with the discovery of dormant abilities.

Mike Howell is an average, everyday person who works a boring job at a convenience store, likes getting high with his girlfriend Phoebe, and enjoys a completely unexciting life... except Mike is also secretly a highly-trained, highly dangerous special operative. He just doesn't remember any of this. When a pair of goons try to quietly retire him, his buried programming comes surging back with a vengeance, causing the man in charge of the operation to pull out all the stops to put him down for good. Even if it means leveling an entire small town to do it.

The film was written by Max Landis and also stars Topher Grace, John Leguizamo and Walton Goggins, among others.

Just when Mike and Pheobe decide to get engaged, they both are tased.

Just when Mike and Pheobe decide to get engaged, they both are tased.