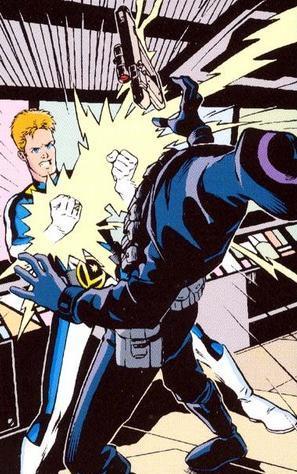 As we know all too well, Lightning Can Do Anything.

Concurrently, electricity has many uses; one of these manifold uses is a natural taser.

This trope refers to the tendency for electricity to serve as a stunning mechanism. If a person can summon/harness lightning or electricity, chances are someone hit with it with be stunned, with arcs flowing across their body. Water is basically a giant taser trap waiting to be sprung by the proper application of an electric shock. Additionally, victims of said tasing with often cry out spasmodically before falling in a heap, in order to properly convey the force of the incapacitating blast.

This is very common in Video Games, where the paralysis Status Effect is frequently inflicted by electric attacks or visually represented by electric sparks.

Related to Shock and Awe, as most of the Electric weaponry related therein would carry this effect.

In SF literature after about 1955 you are much more likely to encounter a Sonic Stunner. Since then Static Stun Guns have been primarily a visual-media trope.

A Static Stun Gun can be considered a subtrope of Stun Gun, because both kinds of weapons have the ability to incapacitate. It's just that the former is explicitly mentioned to be lightning-driven while the latter can use something else besides electricity to do the same job.

See Lightning Gun for a more lethal way to use electricity, and Taser Tag Weakness for when a Static Stun Gun proves just as useful against superpowered individuals as it does against unpowered ones (i.e. very useful).