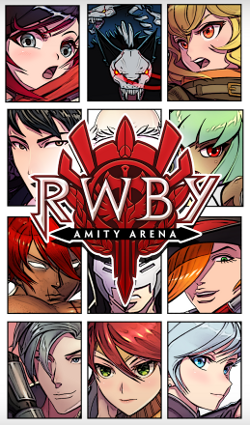 RWBY: Amity Arena was a Player Versus Player mobile phone-based video game released in 2018 by NHN Entertainment and shut down on January 28th, 2021. It is based off of the popular web-aired animated series RWBY by Rooster Teeth and Monty Oum.

It started prior to the events of Volume 3: you were confronted by Ruby Rose and her half-sister Yang Xiao Long over the brand-new game "Amity Arena", using people participating in the Vytal Tournament. With Ruby and Yang's help, you were given the basics over how this new Tower Defense game works and you set off to climb the ranks in your own way.

The goal of the game was to destroy the enemy structures while protecting your own (2 turrets protecting one big tower, the destruction of the latter being an Instant-Win Condition). Each player had a Mana Meter ("Aura") progressively filling as the match goes on, and a deck of 8 cards prepared before the match and appearing in a random loop 4 cards at a time. Each card cost a set amount of Aura, with usually the most powerful ones being the most expensive to play. After 3 minutes, the player with the most remaining buildings won; if the players still have the same number of structures, the match went into Sudden Death for 1 or 3 more minutes depending on the Arena.

The game also featured a Hack and Slash single-player side mode added post-launch in March 2019 in which the player directly incarnated Ruby or Weissnote more playable characters were planned to defend a tower from several waves of Grimm and members of the White Fang.

As an Allegedly Free Game, Amity Arena contained its fair share of Microtransactions, Loot Boxes, and other Revenue-Enhancing Devices, though the ranking system (usually) made Bribing Your Way to Victory useless (outside of having your favorite characters quicker than the rest).

The game features examples of the following tropes: