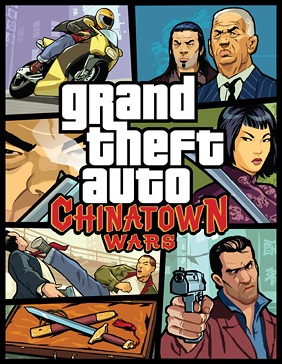 Forget it Huang... it's Chinatown.
Yo, it's a manhunt, my mentality is militia
If my four-fifth had lips, I'd make it French kiss ya
Cuz no mission's impossible, I carry my Wu-Tang sword
On my back, and attack all obstacles
Burnt down buildings, avenging my father's death
A store for ransom, and snatchin' crystal meth
I pillage, my warpath is unpredictable
Leave 'em dead on arrival, broke up or critical
— "Chinatown Wars" by Ghostface Killah and MF Doom
Advertisement:

A 2009 game originally an exclusive for the Nintendo DS (though later ported to PSP, iOS, and Android), this is the thirteenth game in Rockstar's Grand Theft Auto series and the first original title to appear on a Nintendo console since the release of Grand Theft Auto Advance on the Game Boy Advance.

Huang Lee, the spoiled son of a recently murdered Triad boss, arrives by plane in GTA4's Liberty City with Yu Jian, a sword that Huang's father won in a poker game and has decided to use as an heirloom to deliver it to the new patriarch of the family, Huang's uncle Wu "Kenny" Lee. Shortly after landing, Huang's escorts are killed by assassins and he is shot and kidnapped. The assailants steal the sword and, thinking Huang is dead, dump his body in the water. Huang manages to survive and informs Kenny that Yu Jian has been taken. Kenny explains that he had intended to offer the sword to Hsin Jaoming, the aging Triad boss in Liberty City, as a means of securing a position as his replacement. Kenny is dishonored and reduced in power due to the loss of Yu Jian, leaving him and Huang working to keep their businesses afloat. What follows is a Gambit Pileup as Huang tries to find the sword, move up in the ranks of the Triads and keep all his body parts intact... something not always easy to do in Liberty City.

Instead of the top-down perspective or a view behind the protagonist, Chinatown Wars is unique in the series for its isometric camera perspective. As opposed to the fully rendered aspects of later entries in the series, Chinatown Wars has Cel-Shaded Graphics and comic-book style cut-scenes (though the Cel-Shading was toned down in the PSP version). It also features a number of mini-games that took advantage of the DS's touch-screen interface (replaced by Press X to Not Die in the PSP version.) Also, a large aspect of the game is the Drug-Wars style system of buying and selling various narcotics around the city to build up cash reserves.

As an installment, it was almost universally well-received, though the DS and PSP platform's sales were far below expectations. When it was released on the iPhone platform, however, the sales soared to the top of the App Store's charts.