"Operator, are you there? Good – I was afraid you didn't make it out."
—Central 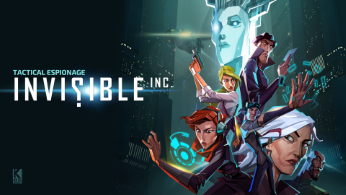 Invisible, Inc. is a cyberpunk-themed procedural turn-based stealth game from Klei Entertainment. Set in the year 2074, the player assumes the position of the Operator, a member of the titular company. A mercenary espionage group, your role as Operator is to direct your team of spies to break into Corporate installations to steal money, intelligence, weapons, and recover any agents that have gone MIA. But sneaking into highly guarded facilities won't be easy, especially with the Corporations tracking your movements. With an increasing alarm the longer you stay in a mission, your agents will struggle to survive against increasingly difficult odds. With 72 hours until the Final Mission, every decision counts.

Invisible, Inc., formerly called Incognita, entered Steam Early Access on August 20th, 2014, and was officially released on May 12th, 2015. This is Klei's second game, after Don't Starve, to go through Early Access.

An expansion, Contingency Plan, was released on November 12, 2015. Four new agents were added, and the campaign was extended from 4 days to 7 days, with a new special mission at the midway point.

. A wiki can be found here

, and a second, new Wiki here

. At the moment, the most active fan community for the game is located on a Discord server, here

collects all the fanart of the game posted in various places.