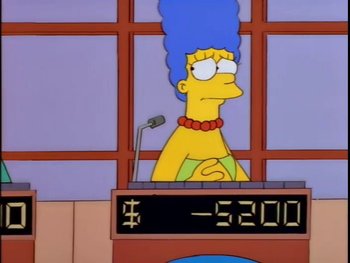 She owes Trebek money.
"No, of course not. The posh kids always win."
— Bambi, The Young Ones
Advertisement:

When a show's main characters participate in a game show, you can expect them to come home defeated. Because Status Quo Is God, winning the grand prize or a large windfall would change the characters' situation and alter the course of the plot. This also applies to non-televised contests. Inversions may happen when significant prizes are not at stake.

If they do win, expect them to be quickly hit by financial trouble that their winnings will be just enough to cover.

More heroic characters will often sacrifice the win for Friend or Idol Decision. More selfish characters are usually done in by their own greed.