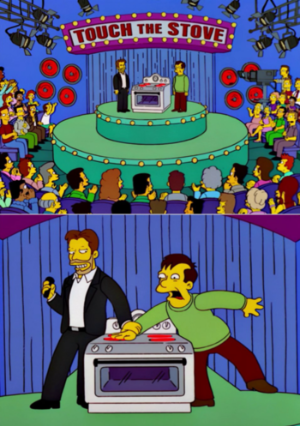 The hot new show everyone’s burning to talk about!
"NEVER PLAYED BEFORE, GORGEOUS? NO PROBLEM! IT'S SIMPLE! THERE'S ONLY ONE RULE. ANSWER CORRECTLY... OR YOU DIE!!!"
— Mettaton, Undertale
Advertisement:

Our protagonist is a huge fan of a Show Within a Show, a popular Game Show. They have wanted to be a contestant on the show, and finally decide to audition. After being chosen, our protagonist finally gets to live out their dream... only to realize that what they see on TV and reality are two different things.

The show may look fun to watch, but actually doing the show is torture. Ultimately, the goal is now not just to win, but to survive, both physically and mentally. It doesn't help that the Game Show Host is a Smug Smiler who puts on an air of mock cheerfulness while savoring the contestants' torment and encouraging the audience to enjoy the Schadenfreude. In some cases, the show is rigged so that the competitors can't even win the prize money, which means that they just subjected themselves to torture and/or humiliation All for Nothing.