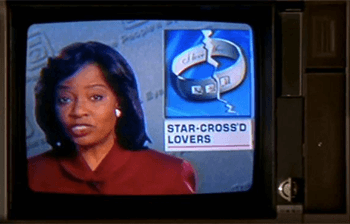 In fair Verona our scene is conveniently explained...
Advertisement:

A sequence needs explaining and the writer has chosen not to go to a voice-over, but has inserted good cause for someone to narrate the action. A television or radio reporter's voice is used, in some cases. This also serves to give the action some scope, making it clear that this is important stuff.

When played for laughs, this is Kent Brockman News. See also Mr. Exposition and Coincidental Broadcast.