Film / Sky Captain and the World of Tomorrow 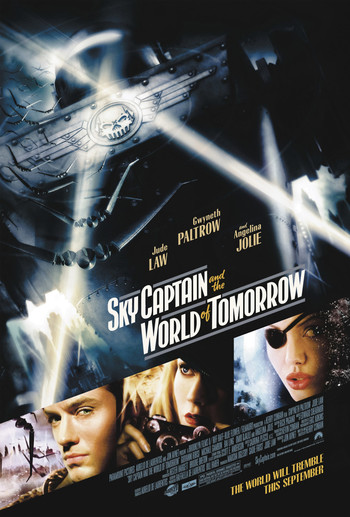 "This is Sky Captain. I'm on my way."
Advertisement:

Sky Captain and the World of Tomorrow is a 2004 movie homage to the Two-Fisted Tales of the 1930s, written and directed by Kerry Conran.

The plot shamelessly uses the outrageous gadgets and cliches of the Pulp Magazine and Comic Book genres, plus numerous shout outs to other media of the period. The film is notable for being one of the first to be filmed on a completely digital backlot, with all shots being done in the studio and against a substantial amount of blue screen.

The movie was originally planned to be the start of a franchise, but due to poor box office, a sequel never happened. An anime was also planned, but that was also cancelled. While the film was ultimately unsuccessful at the box office, Sky Captain has garnered a cult following in the years since its release.

Sky Captain and the World of Tomorrow provides examples of: