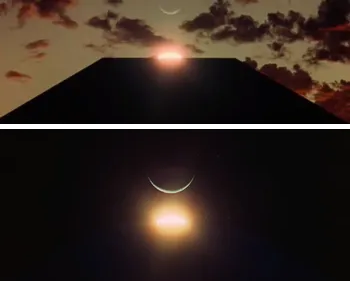 This shot again? The Monolith must be doing something.
Advertisement:

In some works, viewers may notice different scenes that seem very similar to each other, a visual kind of Motif. This can be accomplished by framing those shots the same way, arranging objects within the shot in the same pattern, or having the characters in the same pose. Often in these cases, the director, photographer, or artist is trying to tie them together for some reason. Either something is occurring in them that is related, or there is something present there that they are trying to draw attention to without being obvious. In these cases the settings and characters in the scene may be different but certain elements will be present.

Distinct from Stock Footage in that this is not simply reusing the same footage over and over. Each recurring shot is a unique one, filmed, rendered or drawn separately from the others.

Compare Match Cut for a similar technique used to transition between scenes. When this is employed at the start and end of a work, they form Bookends.