Film / The Cranes Are Flying 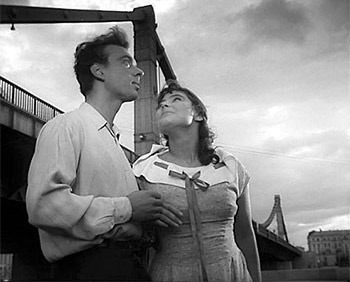 The Cranes Are Flying (Letyat zhuravli) is a 1957 film from the Soviet Union, directed by Mikhail Kalatozov, starring Tatyana Samojlova and Alexsey Batalov.

It is June 1941, and Veronika and Boris (Samojlova and Batalov) are young people in Moscow who are deeply in love and engaged to be married. Unfortunately, Operation Barbarossa interrupts their happiness, as Boris volunteers to fight and leaves Veronika behind. Tragedy strikes when a German bombing raid kills Veronika's parents, leading her to move in with Boris's family: Boris's father Fyodor, Boris's mother, his sister Irina, and his cousin Mark. Mark is a composer who has somehow avoided being called up to serve in the Red Army, supposedly because he is so talented. Mark is infatuated with Veronika and continues to force his attentions on her, while she holds him at arm's length and waits for Boris, who is fighting on the front lines.

The Cranes Are Flying, released only four years after the death of Joseph Stalin ushered in a period of liberalization in the Soviet Union, is one of the first Russian films to treat the war as a tragedy. Its mournful tone strikes a dramatic contrast not only with previous Russian films about the war, but also with the generally triumphant films made in the west, Britain and the United States having sufferred far less than the Soviets did. The Cranes Are Flying is the only Russian-language film to win the Palme d'Or at the Cannes Film Festival.