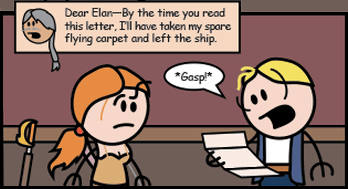 "For the first time in his long search, he has heard her voice again —
if only in writing."
— Narrator, King's Quest VI: Heir Today, Gone Tomorrow
Advertisement:

The narration voiceover of what the on-screen characters are reading. This narration is usually in the voice of the person who wrote the text, although whomever is reading the text may fade in/out at the start/end of the message.

While named for letters being read by a second party, this trope covers any text that gets a voiceover from the author. These could be text messages, diary entries, or posted signs. Often the audience will not see the text in question, but shorter scripts may allow the whole thing to be shown briefly on the screen. Visually, we are often watching the reader for the Reaction Shot, the author while they write, or a flashback that the writing narrates the events of.

Subtrope of Inner Monologue. Compare Reading Foreign Signs Out Loud (for the methods of translating foreign language text shown onscreen) and Sounding It Out (for when the character who is reading the letter does so out loud). Often overlaps with other letter tropes, such as Epistolary Novel (for when one or more letters form a Framing Device for the story), and Epilogue Letter (for when the letter serves as summary/ending for a story).

At the end of "Froggy Little Christmas", Anne sends anonymous notes to Sasha and Marcy's families letting them know they're okay.

At the end of "Froggy Little Christmas", Anne sends anonymous notes to Sasha and Marcy's families letting them know they're okay.