Missed Him by That Much 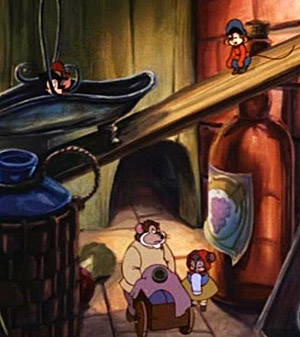 "Look, there's no way that kid survived being lost at sea and is now wandering around up above looking for us."
Advertisement:

Two characters are wandering around a busy and/or crowded location such as a large business office, and they continuously and unintentionally just manage to keep missing seeing each other, turning corners, ducking down into cubicles to peer at intriguing computer screens, and so forth.

Usually played for laughs, but can be used in an attempt to build suspense. Also used to execute and maintain a Not-So-Imaginary Friend. In any event, as some of the examples below will indicate, it is a schtick that is very very easy for a plot-creator to painfully over-do. For works with contemporary, real-world settings, this trope may soon fall victim to the prevalence of cell phones and wind up discredited.

Scooby-Dooby Doors is an overtly comedic and frantic version. Behind the Black is when only one of the two are within frame at any time (presumably Rule of Perception is in effect). For the time-travel variant, see Never the Selves Shall Meet. See also Failed a Spot Check, Hidden in Plain Sight, Gave Up Too Soon. See Close-Call Haircut for the attack version.

The trope's name is a riff on one of Maxwell Smart's many catch phrases, but he never actually engaged in it himself.

Nigel disguised as Bob to everyone casually walks past Blu while he's off monologuing his entry at the festival. Only Gabi sees him and tries to make Nigel turn around, to no avail.

Nigel disguised as Bob to everyone casually walks past Blu while he's off monologuing his entry at the festival. Only Gabi sees him and tries to make Nigel turn around, to no avail.