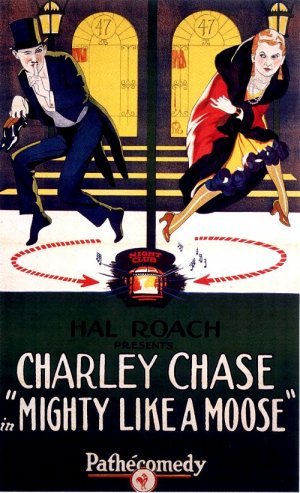 Mighty Like a Moose is a 1926 silent 23-minute comedy film directed by Leo McCarey and starring comedy veteran Charley Chase.

In this film Chase is Mr. Moose, a prosperous married man who is afflicted with a grotesque overbite. His wife, Mrs. Moose, is afflicted with a falcon's beak of a nose. Mr. Moose saves up to get dental surgery to fix his horrible overbite—while his wife is getting plastic surgery to fix that nose. The Mooses, who both go to the same plastic surgeon, meet each other outside the doctor's office after their surgeries. They each fail to recognize each other. Naturally, they wind up arranging to meet for a date.

One of the best of dozens of silent and sound short comedy films Chase made during the 1920s and 1930s.